First Round of federal funding for “Gateway” in budget 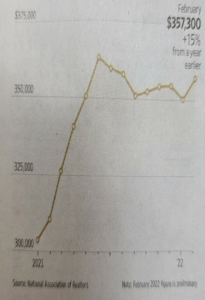 Home-price and Mortgage Rates both Up